The strength development of a concrete structure is strongly influenced by the temperature and weather conditions at the job site. In construction projects, knowing this strength is crucial as many further decisions depend on it. Decisions such as when to remove the forms, scheduling of post-tensioning operations, when to open bridges and roads for traffic, and determining when to remove the heating measures against cold weather all depend on having the right concrete strength.

Break tests and the Maturity Method are two approaches on how to determine concrete strength. In this article we will explain what these methods are, how they work, pros & cons, and how they compare to each other.

Break Tests - What Is It and How Does It Work?

Break tests are the traditional and established way to test the compressive strength of concrete using a destructive approach by crushing concrete cylinders or cubes and measuring the pressure until it breaks.

After a certain amount of curing time, break tests are performed to the samples. Each sample is placed in a compression test machine and pressure is applied from top and bottom until the sample breaks. Once the sample fails to withlast the pressure, the compressive strength is calculated by dividing the failing load by the cross sectional area resisting the load.

The results of these tests are used to validate the concrete strength in a wide range of decisions. This could be when to move to the next step in the construction project or as documentation and validation of the 28-day strength.

Break testing is one of the most commonly used methods to estimate the compressive strength. It is accepted internationally and has been standardized in almost every country.

Do break tests accurately represent the actual strength of a structure?

One of the main limitations of break tests is the difference of mass between the samples and the structure. This mass difference is important because it affects the heat emitted during the cement hydration process. And the amount of emitted heat affects the strength development speed.

Cement hydration, the process where concrete becomes solid and develops strength, is an exothermic reaction, which means that when the reaction occurs, heat is emitted. The amount of emitted heat varies depending on how many components are reacting at the same time. For example, a big structure will have a high mass and consequently there will be many components reacting with each other at the same time. Each of these reactions will emit some heat and when combined, the total heat emission will be very high. In contrast, if there is less mass, there will be fewer components reacting and therefore, less heat emission.

In the graph below, we can see the temperature history of a structure, monitored in each of its four corners, and a test sample (Test Cylinder #3).

Graph 1: Temperature history of the structure’s four corners and a test cylinder

This difference is important because the heat emission has an effect on the speed of the strength development. When the temperature rises, the components’ particles will collide more often and with higher energy, causing the reaction speed to increase. In contrast, if the temperature is lower, the components’ particles will collide less and with lower energy, so the strength development is going to be slower.

The effect of temperature in the concrete’s strength development can be seen in the graph below.

Graph 2: Strength development of the structure’s four corners and a test cylinder

Looking again at Graph 2, we can see that the target of 21 MPa was reached around 24 hours later for the test cylinder compared to all of the structure’s four corners. This would have meant that this time could have been saved and instead some processes could have started earlier.

The last thing to take into consideration is that, when using break tests, it is assumed that the structure cures at the same speed everywhere. However, in a structure there are zones which will cure faster than others due to temperature differences. For instance, the structure’s surface is normally more exposed to cold air, winds, and different weather conditions – and these will directly affect the strength development of the concrete at the surface.

For all these reasons, it can be discussed whether break tests are representative of the structure’s actual in-place strength due. The smaller volume and the lower temperatures of samples results in a different rate of strength development when compared to that of a structure.

Can break test results be trusted?

Low breaks or inconsistent compressive test results is a common problem in the construction industry. There are many standard procedures describing proper handling and preparation of test samples, however, many times the procedure is not done according to the specifications resulting in inconsistent results.

Therefore, when receiving low break results, it becomes difficult to identify what caused the low result. These results could indicate that the concrete mix was not designed well or that the supplied material was not up to the specifications. But it could also have happened because the samples were not prepared or cured properly, they were damaged during transport or the testing machine was not calibrated properly.

All of these potential causes will create a lot of uncertainty in the project as it would become unclear how to proceed next, wasting a lot of time waiting and investigating the different possible causes.

Maturity Method - What Is It and How Does It Work?

The Maturity Method is a non-destructive method that can be used to estimate the early-age strength development of concrete.

In this method, you start by performing a maturity calibration in a laboratory to find the correlation between time, temperature, and strength. During the maturity calibration, you make some samples with the concrete mixture that will be used in the project and instrument some of them with temperature sensors and recording devices. The samples are then cured under the same conditions and the temperature history is measured using the sensors. Break tests are then performed at different test ages to determine their compressive strength. With the strength data from the break tests, and the maturity from the temperature history, a best-fitting curve (Maturity Curve) is plotted through the data points. This curve represents the strength-maturity relationship for the concrete mix. 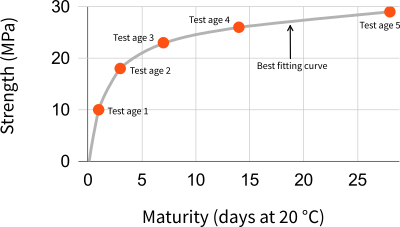 Limitations of the Maturity Method

The maturity method has three limitations. The first one is that it is required to perform a maturity calibration for each concrete mix to estimate the strength. The second is that high variances in the delivered batching can affect the accuracy of the strength estimation, since the mix designs will be different. The third limitation is that many countries still require 28 day compressive strength tests, which the maturity method cannot replace. However, the number of break tests used for other purposes, like determining when to continue with different processes, can be significantly reduced.

Advantages of the Maturity Method Over Break Tests

Even though break testing is the most used method to validate concrete strength, the procedure to make the samples is time consuming, and many times the procedure is not done according to specifications resulting in low breaks. Moreover, the samples have a lower mass and, therefore, lower temperatures, which produce a slower strength development when compared to the structure. This means that the samples are not replicating the actual strength development of the structure.

The Maturity Method overcomes some of these limitations:

Read more about using Maturix for Strength & Maturity Monitoring and for Temperature Monitoring.

Using breaks tests or the Maturity Method to determine concrete strength both have their pros and cons. In the table below you can see an overview of some of the differences between the two methods:

Can I replace my break test with sensors?

There are still some limitations when it comes to a full replacement of the of break tests, as the results of these are often a requirement to comply with concrete standards.

This means, in other words, that break tests are often still necessary. For example, you may need to perform a 28-day strength test in order to validate that the concrete mix you received had the correct mix proportions and has, therefore, achieved the desired concrete strength from the project specifications.

Refer to the country or regional specifications if you want to find out to which degree is it possible to replace your break tests. 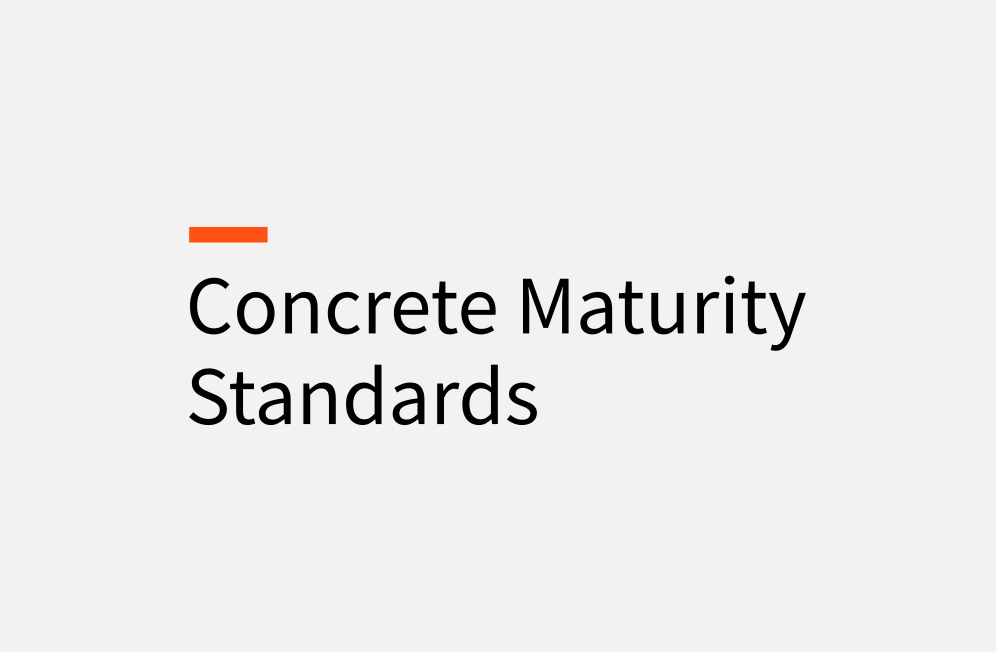 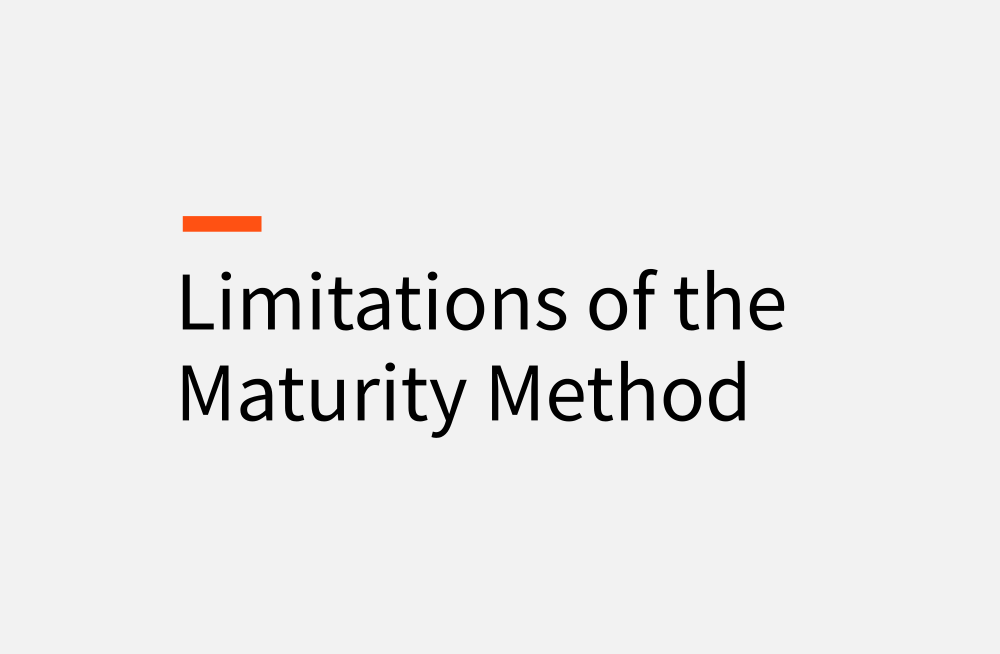 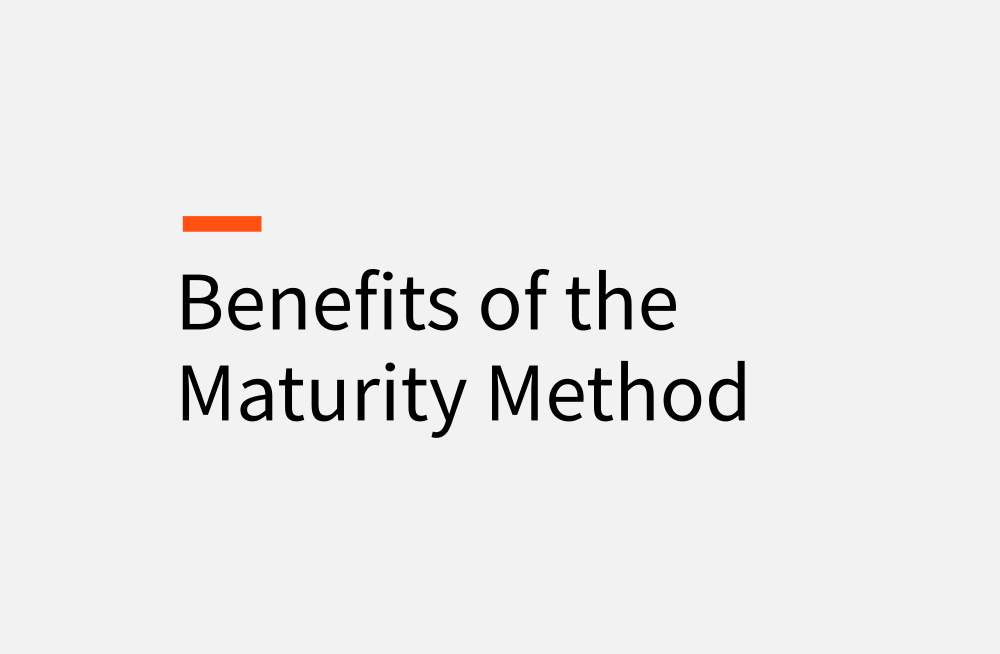 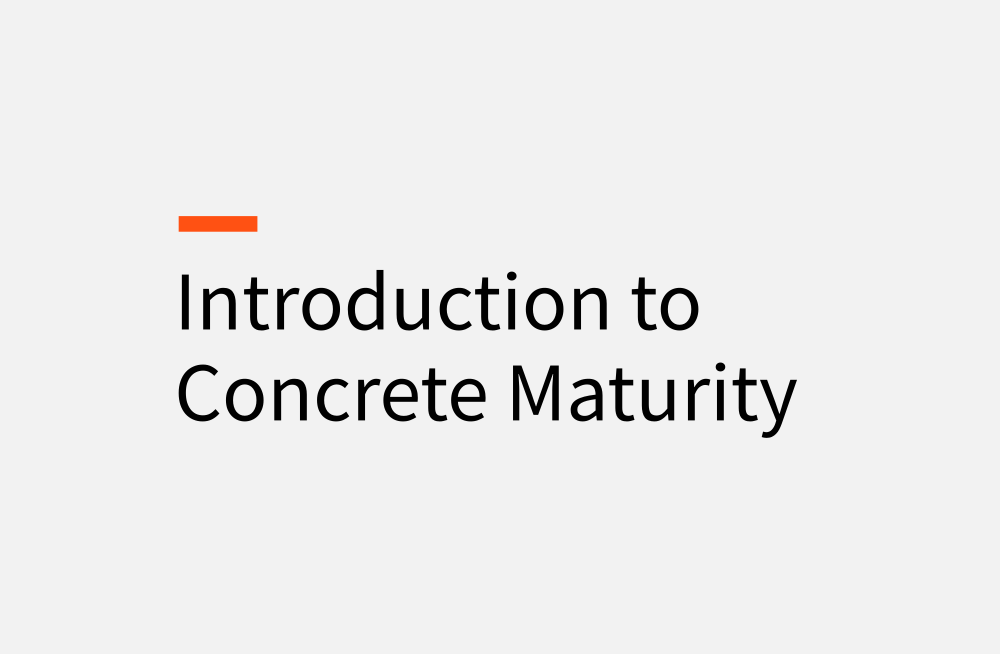 Let's find out if Maturix can help you to boost efficiency on-site!

Maturix® is developed by Sensohive Technologies ApS, a Danish tech start-up for wireless sensor solutions and IoT. Maturix is a smart solution for monitoring of the concrete curing process.

Icon-facebook
Linkedin-in
Xing
Youtube
We use cookies on our website to give you the most relevant experience by remembering your preferences and repeat visits. By clicking “Accept”, you consent to the use of ALL the cookies.
Cookie settingsRead MoreAccept All
Manage consent

This website uses cookies to improve your experience while you navigate through the website. Out of these, the cookies that are categorized as necessary are stored on your browser as they are essential for the working of basic functionalities of the website. We also use third-party cookies that help us analyze and understand how you use this website. These cookies will be stored in your browser only with your consent. You also have the option to opt-out of these cookies. But opting out of some of these cookies may affect your browsing experience.
Necessary Always Enabled

Any cookies that may not be particularly necessary for the website to function and is used specifically to collect user personal data via analytics, ads, other embedded contents are termed as non-necessary cookies. It is mandatory to procure user consent prior to running these cookies on your website.

Let's find out if Maturix can help you to boost efficiency on-site!

Fill out the form and we will contact you to help you find out whether Maturix is useful for you!